The LLHSAT Advisor was configured in Turbo Texas Hold 'em to play according to the strategy set forth on this web site. We then placed the advisor in the company of some different opponents.

Some notes about the current LLHSAT Advisor...

The current advisor does starting hands only without some "help"

The current advisor is designed to play the starting hand selection as listed on this site (although we've found at least one "bug" in its strategy which we will be fixing shortly), however after the flop it does not play optimally unless you allow Turbo Texas to adjust its play style (which is an option during game setup) which lets it play more like the Turbo Texas Holdem advisor after the flop.

We'll be working on tweaking the after-the-flop play so it falls more in line with what we suggest here but just to give a heads up that if you experiment with the LLHSAT advisor you may see it making plays that we don't necessarily advocate if play adjustment is turned off.  Right now the Advisor is really just a starting hand simulator that will show how these starting hands fare in a multi-way environment.

Next, rake is not taken into account in these samples, so you need to factor that in when you are playing low limit poker. Specifically you need to pay close attention to what rake your cardroom as some brick and mortar have a rake that is so high that it is impossible to beat in the long term.  Needless to say avoid this situation and be sure to let them know why you aren't playing there.

Stock Turbo Texas "loose" profiles may not be as loose as some of your opponents.

Finally, it can be tough to get the pre-made loose profiles to play as many hands as you'll see in a live brick and mortar game.  The GA Joe profile, for example, claims to see 72% of flops but you'll very often be looking at 5-way or less action with this profile which is not necessarily what you'll see at some hyper loose low limit games found in California for example. With that in mind you may need to create your own modified opponents which see even more flops (we'll also be working on providing some of those)

Having said all that....

Here are the statistics:

The results above are after 228,953 hands were dealt at a 3-6 hold 'em table vs. a table full of loose and really loose players with two people playing using the strategy on this site.

If you think you won't see 200k hands anytime soon consider this: you can have several online poker games going at once.  You'll see 200,000 hands in about 1000 hours if you play two tables at the same time. 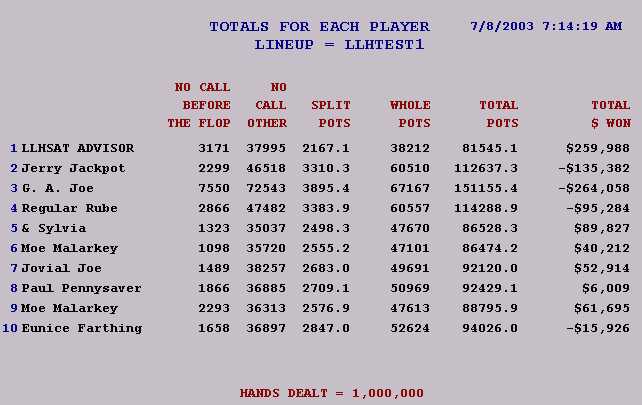 This analysis was done with one person playing according to the strategy on this site vs. 9 different loose personalities for a million hands. The LLHSAT ADVISOR cooked the table here. This is a realistic low limit table you might sit at at a Southern California casino, for example. 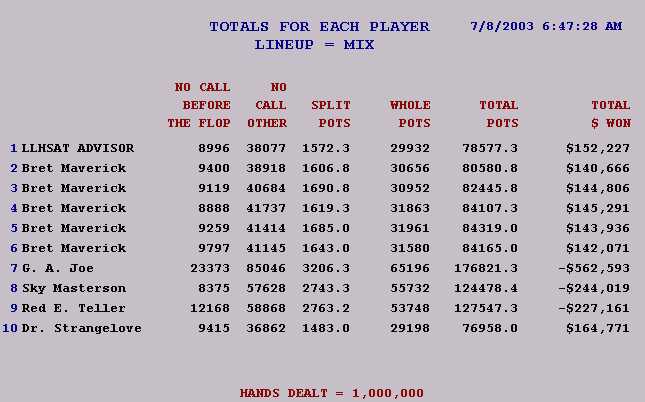 All that comes down to table selection which is critical for this strategy to make you money.